John races through, tripping and stumbling along the way in an adrenaline filled panic… and that’s merely his review. Imagine how bad it would be if he actually was one of the characters in the new release from iello games – Zombie 15′

Zombie 15′ is actually the Kickstarter campaign I wrote this soapbox piece about. As you can tell by the fact that I already have my copy, I did change my mind and indeed backed the project.

Zombie 15′ takes the best elements of co-operative play and of real-time gaming and smooshes them together very effectively. It avoids usual dominant player problem which most co-ops suffer, simply by not providing time to discuss it. Even so, you can’t just play your own game and hope for the best. Our failed attempts so far were purely because someone is left on a tile alone (getting greedy whilst searching) and the Horde showed up. Almost every play has led to loud laughter and each of us frantically impelling the others to make a damn choice! With surging adrenalin the pay-offs are invigorating and the failures are inspiring.

It’s not a perfect game, but it is very close. The set up time has mildly frustrated some (My tip is to put the tiles in order first, have one person call the numbers out, one pull them from the stack and a third place them – as this has led to sub-five minute setup times). At least one of the maps also has a mistake where three of the tiles are used twice – this is easily resolved, just confusing at first.

Luck is also a factor. Perhaps counter-intuitively, Horde cards being too spaced out can be a game-ender. When the big bad is not showing up, it’s growing to a ridiculous size before being dumped out on one lone player. However, because each try is only a maximum of 15 minutes, no-one has ever rejected just resetting and having another go! We’ll get ‘em this time!

The music builds in volume, pace and atmosphere and if you’re in an environment where you can crank it loud 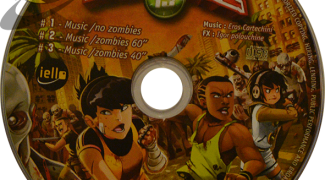 then I would certainly recommend doing so. Having said that, I’ve played this in a pub with a noisy gaming group just using a tiny speaker attached to my phone and it worked brilliantly. The growls, although not traditional zombie utterances, make perfect non-language specific prompts. I would say that the end of the track, when you’ve failed due to running out of time, could be a little more dramatic as it just, sort of.. fizzles…out… a little.

In my opinion, this is the best zombie themed game around; it’s what Zombies! wanted to be but missed the mark. It’s also the best sound-track timed game. As it remains turn based you are actually able to function as a team – whereas simultaneous play, as used in Space Alert, thrives on the fact that they deny you the key elements you need to act cohesively. Yet, because turns are desperately short, Zombie 15′ doesn’t leave you waiting for long and you’re almost always required to help manage elements during the other player’s turns, meaning you remain continuously involved.

Most importantly, this game really excites me. It is the first title in a very long time that has me wanting to set up another session to play it as soon as the current one is over.