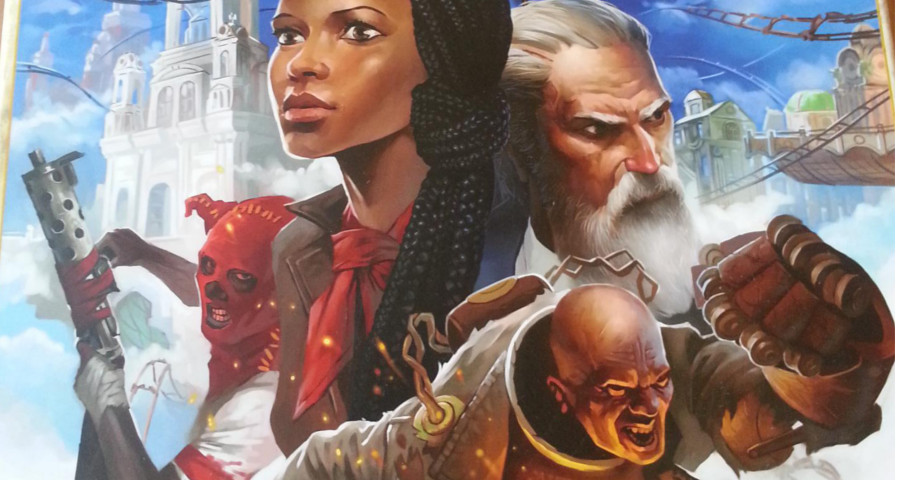 Ok, so we finally got to play Bioshock Infinite: The Siege of Columbia and it was….ok, I guess. Our first play through was a little rushed and muddled (as is often the case with new games), but it didn’t leave me with a burning desire to return to it.

Maybe I’m being a bit harsh here and I would definitely like to give the game another go. I guess that after all the hype surrounding this game that maybe I was expecting a bit more than I should have.

That said, the game makes a lovely first impression. Full of original artwork created especially for the game (and not just a lazy port of existing assets), it is clear that a lot of love went into the production. Plaid Hat (the publishers) have a reputation for quality and this game is no exception.

Gameplay is centred around combat and area control in and around the fictional sky city of Columbia and I was pleasantly surprised to learn that you don’t actually play as the stars of the video game – you play as the “bad guys”. There are some brilliant gameplay mechanics that really help keep the game interesting and varied and, generally, it felt like the game flowed well. (I’ll cover these mechanics in a future post, but trust me, there are some great ideas at play here).

This is all positive stuff, so, why only an ‘ok’ verdict for this first play through? Well, I’m not too sure actually. I guess it really comes down to the fact that, like most ‘big box’ games, there is a lot to take in and learn. The very best games make this process simple and make learning rules a joy. I think with Bioshock I just didn’t quite “get it”. Despite my love of both the source material and big box games in general, it just didn’t grab me as much as I felt it should have. A shame really – especially as I seem to be the exception if the glowing reviews online are anything to go by.

I have no doubt that I will eventually return to the Cardboard Columbia and will post a full review when I do.