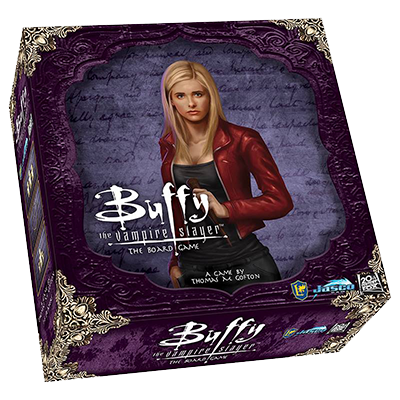 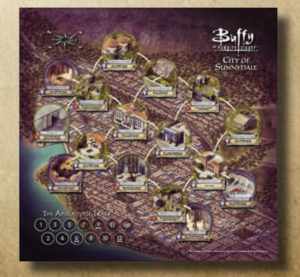 fully co-op game in which you take on one of the well known larger foes. The board is made up of locations, familiar to those who know the Buffyverse, where you move to in order to fight lesser bad guys (demons and vampires) and mid-range Monsters of the week. If you don’t do that well enough then the corpses of their victims or your injuries get added to the Apocalypse track at the bottom of the board – potentially causing you to lose the game. Once you’ve fought off 3 of the Monsters of the week and ‘solved’ the clues they leave behind, then the Big Bad reveals itself. Those familiar with Eldritch Horror may have already transposed the words Elder God, Doom Track, Cultists, etc.
As with the previous Buffy game (the US one, let’s not talk about the UK version…. ever) the most fun to be had is by fans sharing the joy of the show as they play, throwing quotes out or referencing relevant plot moments. However, it does still stand up for the non-initiated as well.
There isn’t a huge amount of depth of choice in terms of actions, especially as all of the item cards are generic ‘Weapons’,’Tomes’, etc rather than being plot specific recognisable items (these are saved for Artifact cards). This did lead to a few turns of ..

meh, there isn’t really much for me to achieve right now so I guess I’ll just…move/search?? This is exacerbated by some of the special powers each character has being a bit so-so. For instance Spike’s and Buffy’s powers are similar enough that we were usually discussing where to employ them rather than the nuances of which is better in a given situation.
However, there is certainly some strategy that needs to be applied to team effort. All players must use all of their 4 action tokens. Including their ‘Special action’ token (which they may spend to do a normal action if they don’t want to do a special move). The kicker is, whenever a special action token is used it triggers an event – these events are generally  add one or two bad guys and one helpless fool.. sorry, I mean Townie to the board as well as introducing an instant or a ‘for the rest of this turn’ effect. So the timing of players utilising their special abilities is significant – do you load up early so that you know the threat you have to deal with, or hold back in case someone else’s events create a bigger problem that you’ll need your special for? You will need to work together in order to move the Townies out of harms way and hopefully rescue them.
After all of the players have used their action tokens and, hopefully, controlled the resulting mayhem. The monsters activate. Any townie in an area with a monster but no hero is killed and added to the Apocalypse track, if there is a hero there then the monster wounds the hero and the wound is added to the track- If the track is filled by 13 tokens then you’ve lost. You have a chance to heal wounds at Buffy’s house for an action, but dead Townies are permanent. Any baddie that didn’t attack a player or a Townie then moves towards the nearest potential Townie victim. So a lot of the actions you take in turn are either moving to a place to protect a Townie or using a location to move either the baddies or the Townies to separate monsters from their prey.
The other strategic issues are when to resolve the clues left behind by the Monster of the Week. Solving the clues is the only way to draw out the Big Bad, but each one reveals a Plot card that has a permanent, horrible, effect However, if you leave the clues on the board so you can solve all three and once and not have the effects then something usually spawns at their locations at the end of each turn. Which is the best way of handling it, well that’s up to you and your fellow Scoobies.
The tension really ramps once the Big Bad is revealed due to 3 clues being solved. Have you saved 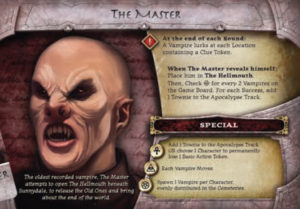 enough townies to mean you can focus on taking down the Big Bad and let all hell break loose, or do you need to try to manage the threat that’s spread far and wide across the city of Sunnydale? Once the Big Bad is in play then it really is a race to get your objectives (solving each of the Plot cards in the same way as you fight the Monster of the Week). We were almost hysterical at the rate that things went from small threat to all out carnage.
Buffy took out the Big Bad, with just two spaces left on the Apocalypse track and the Big Bad had only been revealed for a round and a half!
What the game lacks is the level of immersion that Eldritch Horror has, the threats are very cause and effect and there is little story telling when comparing the two. I think they also missed the chance to have a sequential adventure game. Each monster of the week is killed in pretty much the same way. Embedding the theme more could have led to manipulating characters to specific locations and having the correct items. However, the uber-fans, such as myself, will probably provide that detail for you (whether you want us to or not). On the positive side, it is also more predictable than Eldritch Horror. You are less likely to be utterly devastated by the turn of a card – it will be down to your poor management of the board.
There are also a couple of annoying design choices\mistakes. There are symbol misprints on some of the cards, which admittedly doesn’t affect game play at all. The standees have the

name of the character printed in a location which gets covered by the holder when in use – which could have been avoided if the name was at the top, or even just a fraction higher and the Monster of the Week is a singular generic token rather than providing a standee for each of them, which feels a little cheap – although including them  would require an additional punch board or the other components to be scaled. The rule book could certainly use a revision as it suffers from breaking up relevant information on to separate pages (a personal pet hate) although it’s only a matter of time until someone creates a really helpful cheat sheet.

I am a HUGE Buffy fan, so I was always predisposed to liking this game, However, at this point  I don’t love it as much as I hoped I would. That said, it is a good game and I will certainly be keeping it. It plays at good pace and didn’t outstay it’s welcome. Will it be played often? Well, yes, I can see it being the chosen one.

One thought on “BUFFY, STILL THE CHOSEN ONE AFTER 20 YEARS?”